The votes for the Book 25 Title Competition have started to pour in and it’s been interesting to see some of your views regarding the titles.

I had a wonderful email from John P. who went deep… and I mean deep, into his analysis of which title should be the winner. Here’s the email John sent to me in its entirety: 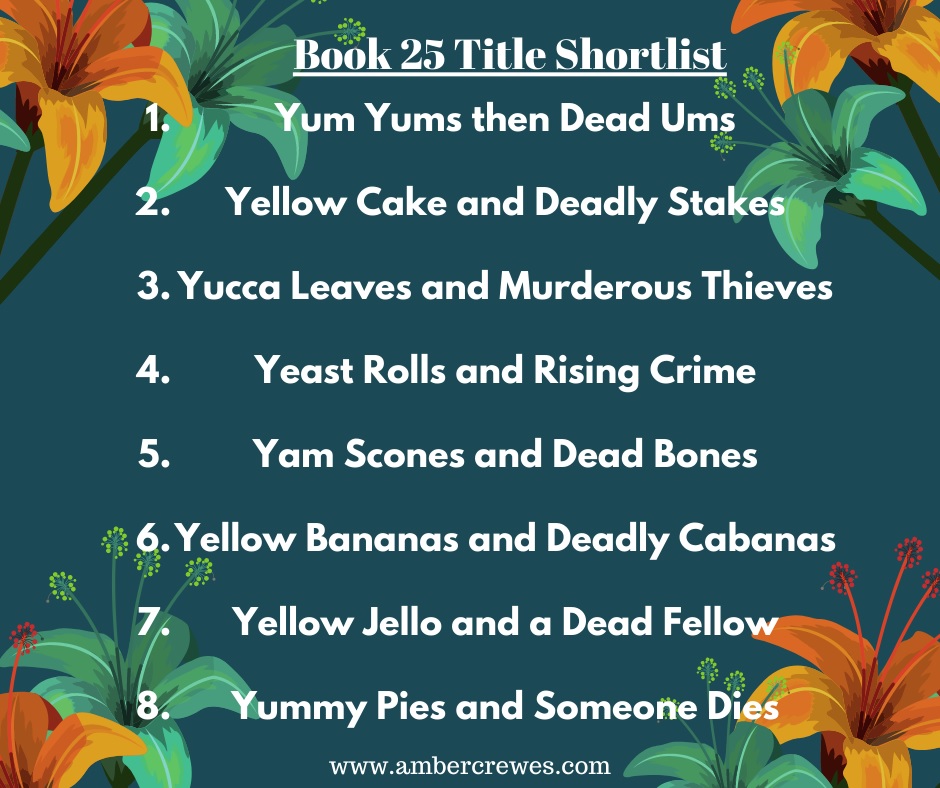 I obviously don’t know the details of the story – Are there murderous thieves?

Does someone die or are they killed?

If there are “dead bones” are they the key element? Etc.

Not knowing what is or isn’t in the story, I have to use other additional criteria for the title.  So here is my process of elimination, hopefully exhibiting the logic that a good detective might use.  Sort of a simple “which doesn’t belong and why.

1.       Eliminate those which present a problem either in what they state or how they state it.

Yeast Rolls and Rising Crime – First it doesn’t rhyme.  Second, it misses the opportunity to play verbs off each other.  Though Yeast Rolls are a pastry, it could also be read where “rolls” is a verb.  As such, “Yeast Rolls and Crime Rises” would be the better fit, if not already eliminated by the rhyming problem.

Yam Scones and Dead Bones – Fine for your American readers who will read it as “Sk ownes” but in the UK, it is “Sk on s” with the “on” accented.  Doesn’t rhyme.

Yellow Jello and a Dead Fellow

Yellow Jello and a Dead Fellow – The repeat of the “O” sound at the end of the first two words is a more abrupt stop to each word, so it doesn’t roll off the tongue as smoothly as competitors

Yummy Pies and Someone Dies – Not as smooth as it would be by changing out Someone with Somebody.

So I accuse Colonel Mustard, in the Conservatory, with the lead pipe…

The selection I’d make is Yellow Bananas and Deadly Cabanas by process of logical elimination.  BUT like many mysteries, the real solution, the twist in the plot reveals that the best title between the two is the other one – Yucca Leaves and Murderous Thieves.    It just sounds better.  Assuming of course there are both yucca leaves and murderous thieves in the story.

Do you agree or disagree with John’s analysis?

I’d love to know your thoughts. Leave your comments below.

← Which title should be the winner on this shortlist?
Xylose Treats and Killer Sweets is LIVE! →