I’m happy to announce that the 2nd mega boxset of the  BESTSELLING Sandy Bay Cozy Mystery series is now live on Amazon! 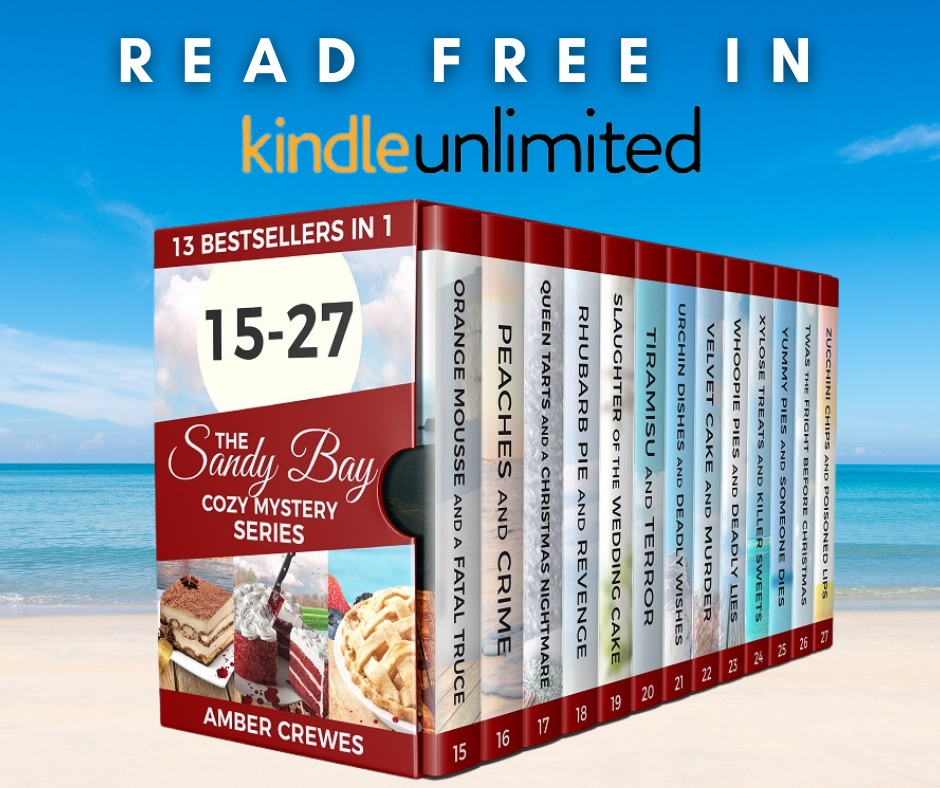 ***Available to read for FREE on Kindle Unlimited NOW!***

THE BOOKS IN THIS BOXSET INCLUDE:
– Orange Mousse and a Fatal Truce
– Peaches and Crime
– Queen Tarts and a Christmas Nightmare
– Rhubarb Pie and Revenge
– Slaughter of the Wedding Cake
– Tiramisu and Terror
– Urchin Dishes and Deadly Wishes
– Velvet Cake and Murder
– Whoopie Pies and Deadly Lies
– Xylose Treats and Killer Sweets
– Yummy Pies and Someone Dies
– Twas the Fright Before Christmas (Bonus Book)
– Zucchini Chips and Poisoned Lips

Orange Mousse and a Fatal Truce
A murdered scorned wife. A prime suspect losing their mind literally and figuratively. A small town bakery owner whose generosity links her to the deceased and accused.

Queen Tarts and a Christmas Nightmare
Two murdered business associates. One family under the scrutiny of a conservative town. A bride-to-be in need of some comfort and joy.

Rhubarb Pie and Revenge
A murdered celebrity impersonator. A cast of unusual suspects. A bride-to-be on the verge of a nervous breakdown.

Slaughter of the Wedding Cake
A murdered celebrity baker. A wedding plan gone horribly wrong. A frustrated bride-to-be who just wants to say, “I do.”

Tiramisu and Terror
A murdered chef on a cruise. A terrible bug spreading among passengers on the ship. A new bride whose dream honeymoon is turning into a nightmare.

Urchin Dishes and Deadly Wishes
A murdered restaurant owner. A small town suspicious of a big tech firm’s advances. A newlywed baker drowning under the waves of change around her.

Velvet Cake and Murder
A murdered politician. A small town torn between the past and the future. A newlywed baker who can’t help poking her nose in a murder mystery that seems off.

Whoopie Pies and Deadly Lies
Lies… they can get you out of a jam… and also murdered.

Xylose Treats and Killer Sweets
A murdered aristocrat. A popular family with dark secrets. A frustrated baker identified as the prime suspect.

Yummy Pies and Someone Dies
A tragic hospital murder. A bevy of unusual suspects. A pregnant bakery owner caught in the middle.

Twas the Fright Before Christmas
Christmas should be the most wonderful time of the year. But Meghan’s seems to be filled with surprises that include betrayal, accusations… and a DEAD BODY!

Zucchini Chips and Poisoned Lips
They say all endings are inevitable… this one comes with MURDER!

***No cliffhanger, swearing or graphic scenes!***